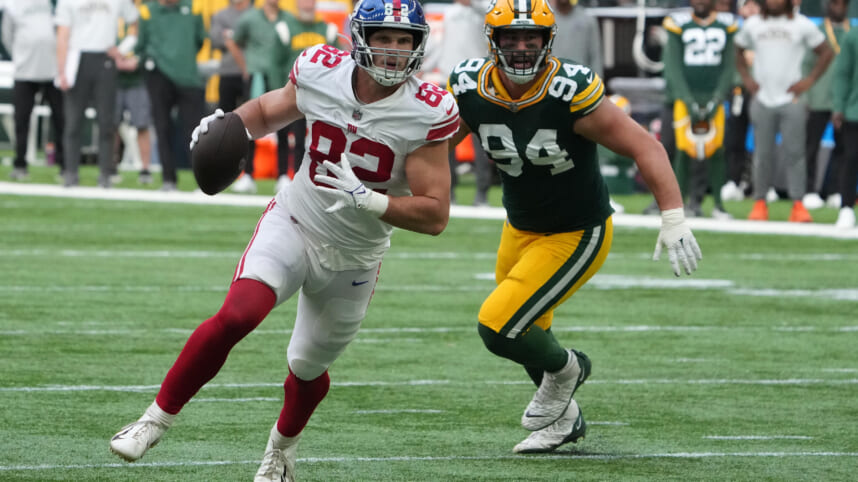 The New York Giants are already seeing big returns on the 2022 rookie draft class. Rookies have played a big role in the success of the Giants season. In particular, the Giants’ pair of fourth-round picks from this year’s draft have been brilliant. Daniel Bellinger and Dane Belton have made an immediate impact for the Giants, bringing incredible value to the 6-2 team.

With the 112th pick in the 2022 NFL Draft, the New York Giants selected tight end Daniel Bellinger. The rookie is expected to be sidelined for an extended period of time after suffering an eye injury in Week 7, but up until that point, Bellinger was having a stellar season.

Through seven games, Bellinger was targeted 18 times and hauled in 16 receptions (88.9%). He totaled 152 receiving yards, two receiving touchdowns, 10 first downs, and also tacked on a rushing touchdown. Daniel Bellinger was Daniel Jones’ most reliable pass-catching option to start the season. Bellinger’s impact was not only felt in the receiving game, but also in the running game.

See also  How to See Prey Outside the United States

Daniel Bellinger made his presence known as a run-blocker. In college, Bellinger was touted as an excellent blocker, but he has since developed those skills and applied them to the NFL. The Giants have asked Bellinger to execute complex run-blocking schemes and be used heavily to open holes for Saquon Barkley.

Daniel Bellinger underwent successful surgery to correct fractures around his eye last weekend (ESPN). The power-hitting rookie is aiming to return in 2-6 weeks, but sources say 4-6 weeks is a more reasonable timeline, by Jeremy Fowler. Either way, the New York Giants will be eager to get the rookie back in the lineup as Daniel Bellinger looks to build on his spectacular rookie season.

The Giants’ other fourth-round pick, Dane Belton, has also had a stellar rookie season. Belton has been thrust into the defensive lineup after returning from a collarbone injury sustained over the summer. The Iowa product has since entered the lineup and excelled in coverage for the Giants.

Through seven games, Belton has seen 140 coverage snaps. He has been targeted just 12 times, allowing just 6 receptions for 88 yards and 0 touchdowns (NFL Rookie Watch). A coverage guy like Belton is exactly what the Giants lacked in the secondary. The rookie has been an excellent complementary player alongside the likes of Xavier McKinney and Julian Love.

McKinney and Love have the ability to get in the box and impact the running game, but the Giants can now use their skill sets without sacrificing coverage thanks to Dane Belton. This ability to excel in coverage has opened up defensive coordinator Wink Martindale and demonstrates the incredible value that Dane Belton brings to the New York Giants.