Kenny Pickett’s first Steelers/Ravens game was short-lived, leaving in the first quarter after suffering a concussion on the team’s first drive of Sunday’s game. After initially being cleared, he was removed from the game one drive later and replaced by Mitch Trubisky.

The sack/injury saw the Ravens have a free runner, a linebacker in the middle, which Pickett managed to elude before being taken down by LB Roquan Smith, spun and thrown down leading to the injury.

That begs the question – why was the linebacker free? Who is to blame?

We answer that today, but look at a bigger question, an ongoing theme. The Steelers keep trying the same thing and it’s not working.

Until Sunday. It’s 3rd and 4. Pittsburgh is in empty protection here. Five linemen to block any would-be rushers. No tight ends, and no running backs as part of the protection. The Ravens are running a look seen around the league this year, a Mug/Double Barrel look with both ILBs in the A gap. Almost all teams display these looks to protect against stress. Even the Steelers have this year although they do it less often than other units. This is the pre-snap look. 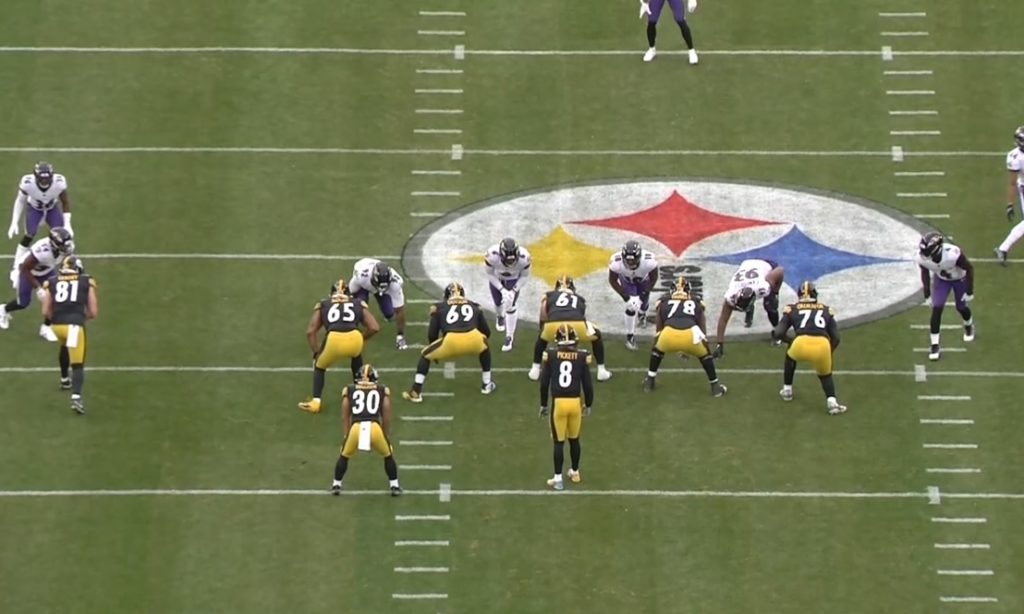 The Steelers have five blockers, their o-line, to block six potential Ravens’ rushers. The D-line, ROLB, LOLB and both ILBs. It’s messy math. The Steelers are short when it comes to protection, which means they are not safe and the ball needs to be thrown hot.

Before we do our deep dive, let’s just show the whole piece. LB runs free, LG Kevin Dotson looks to block no one, Pickett is in trouble, ends up in a sack.

So is Dotson really at fault? Indeed, my first thought was to be careful not to blame him. Empty protection can be tricky, and sometimes players who don’t block someone are actually doing the right thing and accomplishing their mission. On the surface, it makes sense that Dan Moore would be asked to block ROLB and Kevin Dotson RDT. Depending on the scheme and protection, sometimes that can be the assignment, and until I watched the All-22, I thought Dotson could be acquitted. But that is not the case.

This is on Kevin Dotson. And I know why because of something that happened against the Cincinnati Bengals.

All football is a series of patterns. It is not a game played in a vacuum. And at this stage of the year they are pretty easy to pick up. Taking it back to Week 11 against the Bengals. A third-down incompletion to Najee Harris tells the story. Like the Ravens above, the Bengals are showing a double run look and the Steelers are in empty protection. The route tree is a mesh concept with RB as the hot receiver. The Steelers try to beat the blitz by letting the RDE get free, block the ILBs and hit the RB in the flat. As long as the RDE rushes, there is no one on the backside (and if the ILB covers him, he is out-leveraged) and the back will have room in the flat. Everything sounds good.

Here, however, RDE Trey Hendrickson realizes that the back is slipping out and the Steelers are throwing heat. The line slides down and blocks the ILBs, but Pickett’s hot-read to Harris is covered. Ends up trying to throw back the shoulder and Hendrickson contests it well to force the incompletion.

Here is the concept and protection. Watch Dotson slide down to take ILB.

The same thing happened against the Ravens. Empty protection against double run look. Same mesh concept with the back that escapes to keep warm. Same protection with RDE allowed to run freely. Again, Justin Houston drops into coverage and takes the back instead of rushing, eliminating the chance to throw hot to RB Jaylen Warren. It’s Kenny Pickett’s first reading. Just like for Harris, check the eyes and shoulders on his drop. The Y runs the net and Warren is the only player running to that area.

See also  How to watch England vs Wales from abroad

But Dotson fails here by not sliding down at ILB. This is how it is supposed to be blocked. 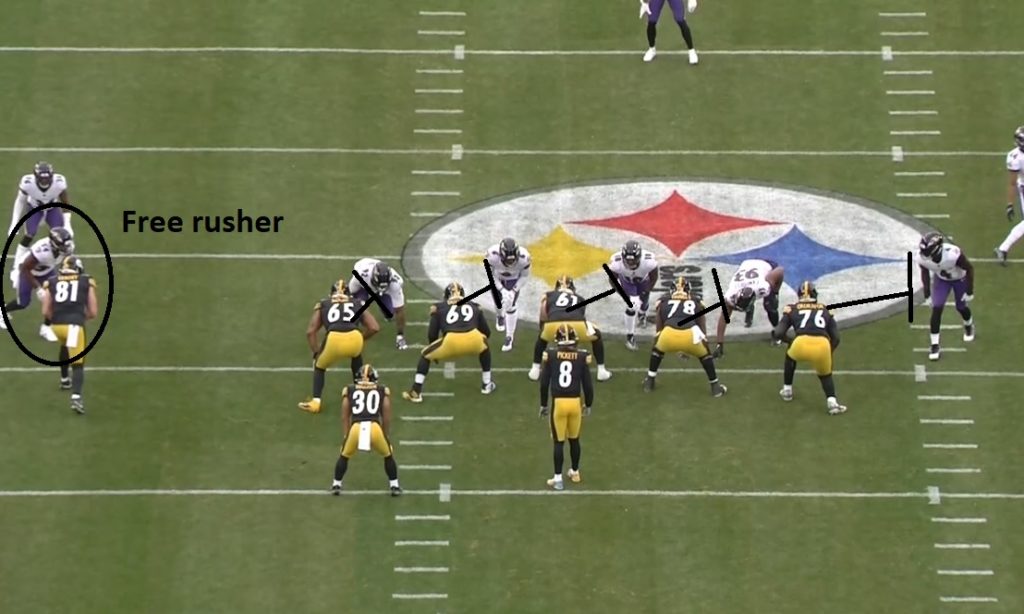 Dotson makes a mental mistake and takes the RDT when Moore has him. Moore doesn’t even see Houston, more evidence Dotson has turned up, and immediately takes the RDT. The ILB runs free (this could be a “Rain” blitz where the ILB blitzing is opposite the center slide), creates the pressure, and it’s downhill from there.

Here is the play, air and end zone view. See Pickett here first look to Warren from the snap. He wants to pounce, but Houston and the Ravens have the perfect answer.

From a protection standpoint (the route concepts were different) the same thing happened against the Colts. Remember when RDE Yannick Ngakoue rushed free off the edge to drop Kenny Pickett? It was by design. He was intentionally left unblocked as the line slid down. Moore at DT, Dotson at LB. The Steelers had the same problem and tried to throw hot, but the angle route at the RB took way too long and this was just a bad plan.

So the short answer is. Dotson didn’t do his job. Some teams can block things differently, and sometimes the Steelers can, but we’re talking the same down and similar spacing and concept and read by the QB. At their core, these are all the same. Third, same protection against these MUG looks, RDE is free, back is hot to the limit. So we can detect the error.

But there is a larger point to be made. The fact that the Steelers keep trying to throw hot is a problem. They try to outsmart the defense, but defense wins the chess match, the ROLBs drop and take back and eliminate the primary/hot read.

I’m no track coach, but for my money, I’d always have the backside to hold in against these double-run looks. At least look for the blitz and let go if there is no threat. That would allow OG to take DT, OT at OLB, and the back has a linebacker. Pittsburgh has capable pass-pro backs and Warren has done well. Instead, Pittsburgh is select to allow a potential free rusher, OLB here, and try to throw it over his head. It does not work. The Steelers put their hand on the stove, get burned, and turn it back on just to be safe.

It is a more fundamental problem. Dotson is not absolved of his error here. Unfortunately, he is full of them, which is why I noted that he is such a frustrating player to watch. Big on talent, big on mental mistakes. But the Steelers need to stop trying to fool defenses because it’s not working. Keep the backs in, make it six blockers vs six rushers, and let the QB work on his concept.

One last look at the three plays in the same video. Same look, same protection every time. Only against the Ravens is Dotson wrong, and all the evidence points to him as the culprit for allowing the initial pressure that led to the sack, the injury and Pickett’s exit.