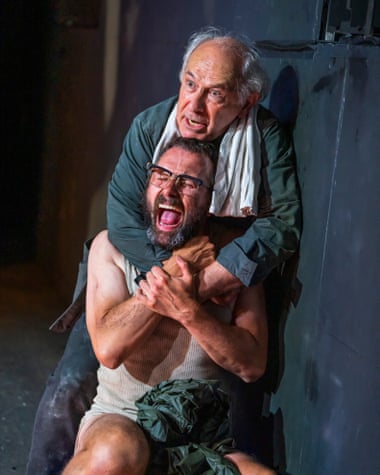 OOne of Britain’s most visionary directors, Deborah Warner, is launching her distinctive program at Bath’s Ustinov Studio. Opera, contemporary dance and cabaret follow, but she opens with The Tempest. Shakespeare’s latest full-length play is a meta-theatrical puzzle, and Warner presents its comforting mysteries and honors its sheer strangeness.

After 16 bitter years in exile, Prospero, a robbed duke of magical arts, gets the chance to bring his enemies to his island (Warner largely cuts the chaotic opening shipwreck). His “gross magic” here seems gross both in a disarming non-illusionist sense and because it is mostly used to mess with the victims’ heads. Christof Hetzer’s studio design has installation vibes – bare wooden boards against the walls, small boxes with pebbles and peat, a strip with a video screen. This is an island of the mind.

Nicholas Woodeson is a side casting for Prospero. One of British theater’s unsung heroes, he is a witty character actor for a rare cast as the top track. But 34 years ago, he played King John for Warner at RSC, and she now calls him his often difficult protagonist.

The role of Prospero has been seen as the aging playwright preparing for death, but Woodeson reminds us of how angry the character is, how his anger drives the action forward. Woodeson is impatient under monkish-white curls, and does not make Prospero sonorous or blissful. He gets dissenting in a stranglehold, knocking on his daughter’s chastity. And what was his plan when he conjured up the storm? Woodeson shows him thinking, improvising. He is also remarkably lonely. When Ariel asks, “Do you love me, master?” he blinks and replies from the heart: “Dear you.” Unresolved emotions flicker through the final scene, and never subside.

You do not go to Warner to giggle, and the scenes of small talk and farce are hard work. Still, especially this week, the unworthy, unscrupulous crab by rules registers strongly. Finbar Lynch is all calculation as Prospero’s brother, makes plans with a voice like a caress and greets forgiveness with a mocking laugh.

Cerebral and always vocally clear, the production is in some ways puritanical, with a distrust – even disgust – of the body’s basic impulses. Edward Hoggs tormented Caliban and the shipwrecked servants he joins are a filthy crew. Hogg, in the dirty vest and trousers, extends into the handsome to throw poop or rejoice. Where some productions question Caliban’s treatment, Warner makes him growl and splash from a bowl like a bitch. His Confederates are sprinkled with mud, dribbled with booze; people back off for the stench. Strikingly presented, it feels like a recurring reading.

Other performances are fresher: In his professional debut, Tanvi Virmani tries to recapture Miranda. Strapped and engaged, she is also her pedagogical father’s daughter – abused by Caliban, she still crouches to help tie his shoelaces.

Above all, Dickie Beau plays the spirit Ariel with mesmerizing silence, an eerie guy for the play’s wonders. His T-shirt bears the word “invisible” and Prospero never meets his eyes. It would not be a Warner production without Fiona Shaw, her good collaborator, so Beau – the theater’s master of lip-syncing – lets Shaw’s recorded voice roll through him and moves in a balanced kabuki glide. When Prospero blames him, his face stretches in a quiet howl, tendons tightened in painful extremities, but his eyes get wet as he urges Prospero to make peace with his prisoners. He is a complete illusion – yet his emotional strength is fascinating.