The Seagull review – Chekhov with tile walls is hypnotic | Theatre 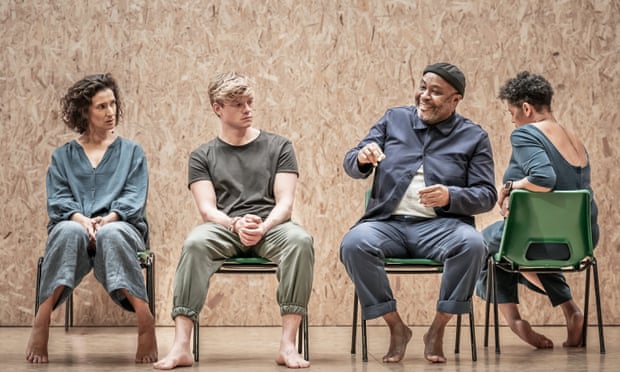 Chekhov’s drama about love and the creative endeavor opens with failure. Konstantin, an aspiring playwright, has staged his first drama for a small audience in this outpost in the Russian countryside. They all scratch their heads at its gnomic abstractions and reject it, except for Dr. Dorn, who is more open-minded: “I did not understand it, but I will remember it.”

Jamie Lloyd’s radical, undressed, strangely gripping production, using Anya Reiss’ cool adaptation, may well be ambitious to Constantine’s ideal of creating a new theatrical form. This is not Chekhov as we know it, nor theater as we know it, certainly not in the West End. Its blatant non-naturalism is reminiscent of Lloyd’s roaring radical Cyrano de Bergerac, with actors arranging and rearranging themselves on plastic chairs and talking to microphones on Soutra Gilmour’s set of wood chipboards.

Where the show was filled with music, puns and an energy that jumped out of the stage, this is soft and deliberately sleepy, it seems, with a few lines mumbling and a few words swallowed, as if these characters are either engaged in intimate pillow talk or utterance. their last words as life flows out of them.

Actors stand almost lifeless and move forward for a scene and back again. Sometimes they sound dreamy or drunk, other times they look like they are sleeping in their chairs, or immobilized, not completely human.

For a play that repeatedly turns questions of performance, this production performs these interrogations. Emilia Clarke’s big – eyed wannabe actress, Nina, talks about how much performers move her limbs on stage, but these real counterparts move minimally.

After the interval, the walls are partly removed as if the few traditional theatrical elements that are with are slowly deconstructed around the actors. If it was not so evenly staged, this could be a reading or scratch night – or even a drama school experiment. Is all concept and no solid effects? Sometimes it feels like we’re watching The Seagull With Zombies – sincere, frustrating, both too drawn out and extensive. But it never ceases to fascinate, and in the scenes that work best, this performance is brave, compelling and powerful: when Constantine’s actress, Arkadina, tells him he’s a “nobody”; when she asks her lover, Trigorin, to stay with her; when Nina and Trigorin simply sit and stare into each other’s eyes at the back of the stage, while a scene occurs in front.

Clarke is the biggest commercial star and convinces Tom Rhys Harries of his Adonis-like Trigorine, but the bigger appearance comes from Indira Varma as the very excited mother, who seems like the most vivid character on stage. Daniel Monks’ Constantine radiates a gloomy sleepiness and it is a charismatic turn of support from Robert Glenister, but Sorin feels like too small a part for him – we want more and more.

Sometimes there is a Beckett focus on the voice, and on facial expressions, which creates a hypnotic focus and we lean in to capture the intimacy of these characters. The spell breaks after the interval, when it starts to feel too quiet, but this is a maverick show like, like Oklahoma! on Young Vic, proves how dangerous and daring a revival can be. As Dorn concludes with Constantine’s play: “It made an impression. I do not know exactly what kind yet. “