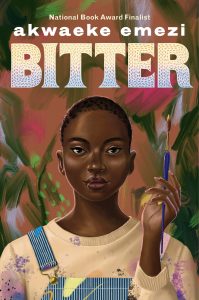 I would be remiss not to begin with the words that Akwaeke Emezi writes in his dedication Bitter: ”Still and always, for Toyin Salau. You deserved a better world.”

I’m not sure anyone can appreciate the depth and richness of it Bitter without this background. Named after the main character, Akwaeke Emezi’s fantasy novel is about the toys of the world, and how their magical abilities are used and abused to create a better world amidst social unrest. Specifically, our main character Bitter, a young woman whose artistic abilities may have the power to influence a revolution. Only she is not interested in it.

The opening conflict of the novel is just that: Bitter is a queer young girl who has an intimate experience with violence and loss – first the loss of her biological mother, and then the violence of a foster family who rejected her entire being. Around her, school shootings, police brutality and the indifference of the adults meant to protect them from her patience and self-esteem are raging. With housing insecurity, she is not always sure what the home looks like, nor can she always appreciate it. After all, staying out of other people’s business is how she survives. As a prequel to Akwaeke Emezi’s Petthis novel focuses on the birth of the monsters and creatures that appear in later novels, with an emphasis on black radical protesters and their means of survival.

After years of abuse, Bitter has found refuge in the artistic haven of Eucalyptus, where she can paint and be herself. Surrounded by her chosen family, Bitter can shut down the protests outside, even as her friends are on the front lines against corrupt millionaires and violent law enforcement. Although some of her friends are involved in the protests, she feels intense anger and resentment towards Assata, the mostly youthful group of people who lead protests every night despite rubber bullets, tear gas and other forms of law enforcement violence. She is constantly reminded of this fact, not only because she lives in Lucille’s heart, but because she can’t seem to stop seeing her former lover, Eddie.

Eucalyptus is her sanctuary. Even more, her newfound privacy means she can explore her gift of bringing tiny drawings to life with just a few drops of her blood. She has even begun to fall in love again, with a sweet young boy whose mission in life has become to heal his community from trauma. This comfort makes Bitter restless, but even though her friends support her decisions, she wonders what the cost is to participate or sit on the sidelines.

The novel takes an unexpected turn when the revolution hits too close to home. Caught up in conflicting emotions, Bitter makes an abrupt and dangerous choice to do something about her situation. The consequences of her decision and use of her gift change the entire tide of protests and open the book to a new world of monsters and creatures that prey on her deepest sense of hopelessness and desire for revenge against those she has harmed her and her friends.

Emezi offers some intense discussions about the politics of revolution through the teenagers in the book. Bitter is a small tome, but a mighty one; discussions of the merits of nonviolence and personal convictions spread across the page in a timely and self-aware manner. As events unfold beyond the characters’ control, they make reckless decisions in hopes of creating a better world. Emezi’s understanding of youthful protesters is both perceptive and precise. They are neither idealistic nor completely exhausted, although they speak of the exhaustion that plagues many young activists as they fight battles that older generations should have completed. They center the protesters and radical black activists, rather than the politicians’ response, in a way that is honest and tender.

The intensity of the action only increases as more beings and creatures enter the fray. While the leaders of Assata wish to remain non-violent, forces beyond their understanding insist on righteous destruction. In an unspoken but poignant emphasis, Emezi shows that it is the children of this world who show restraint, despite the fact that most of the politicians in their lives show none. Indifference and burnout are also monsters that Bitter and her friends must confront.

I loved Bitter’s character – her artistry, voice and conviction were unwavering, despite her fear and her desire to be left alone. Ube, the leader of the Assata movement, was similar in a way that served as a foil for Bitter. As one of the leading voices in the movement, his strength and courage serve as some of the most tense moments in the novel.

Bitter was an easy read, even with its heavy themes. As the main character, Bitter oozes abundance: honesty, rage, healing and justice delivered in one smooth reading.

Maya C. James is a graduate of the Lannan Fellows program at Georgetown University, and a full-time student at Harvard Divinity School. Her work has appeared in Star*Line, Strange horizons, FIYAH, Soar: For Harrietand Georgetown University The Berkley Center Blog, among others. She was recently long listed for the Stockholm Writers Festival First Pages Prize (2019), and was on a feminist speculative poetry panel at the 2019 CD Wright Women Writer’s Conference. Her work focuses primarily on Afrofuturism, and imagining sustainable futures for vulnerable communities. You can find more of her work here, and follow her on Twitter: @mayawritesgood.

This review and more like it in the July 2022 issue of the Locus.

While you are here, please take the time to support Locus with a one-off donation or recurring donation. We depend on reader donations to keep the magazine and website running and want to keep the website paywall free, but WE NEED YOUR FINANCIAL SUPPORT to continue quality coverage of the science fiction and fantasy field.

©Locus Magazine. Copyright-protected material may not be republished without permission from LSFF.