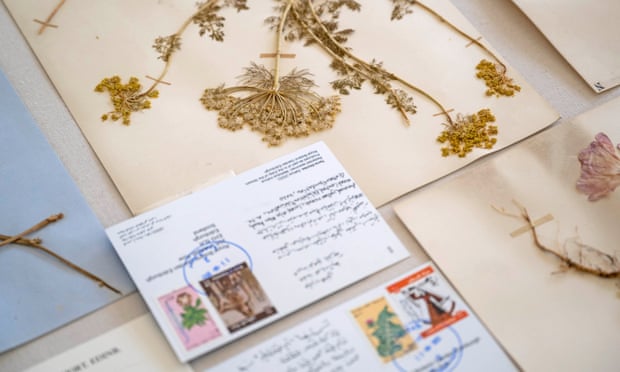 THe tells me my oyster is so fascinating—how it grew and where, what the shape, color, and undulating shades of its black-and-white-striped shell reveal about its decades of experience—that they open up an oceanic story. My choice reveals an interest in art, he deduces, and we both know he could continue to read character this way, except I’m far more interested in the shellfish. This is the living memoir of the oyster.

Hector Dyer’s readings (weekends only; book now, book fast) are part of In the Vortexa beautiful exhibition at Inverleith House in Edinburgh’s botanical gardens concerned with marine animals, flora and fauna in the context of history and politics. Shortlisted for last year’s Turner Prize, Cooking Sections – Daniel Fernández Pascual and Alon Schwabe – features the upper galleries for a sequence of exquisite sculptures. What looks like a Roman mosaic floor is made entirely of crushed shells. What look like nets, ropes and chains are made from heather, kelp and purple moor grass on Skye.

The couple’s environmental activism—against salmon farming, for example—is not easily summed up in artwork, but these are exceptions, specifically a suspended silver sculpture that rhymes the patterns of a salmon scale with the rings of a pine tree to draw connections about our treatment of the water that supposedly sustains both of them.

Downstairs, the Palestinian collective Sakiya has laid out Edwardian floral specimens from what used to be called the Holy Land alongside Sakiya’s postcards showing their contemporary significance. Miss Howard sends home a nicely pressed weed, c1902, which is valued today for its silvery beauty on the West Bank. It’s like an EM Forster story: the politics of botany, related through disconnected postal narratives.

See also  How to clean a mouse

The Edinburgh Art Festival, which is essentially an umbrella term for all the city’s summer exhibitions, goes, like the new trams, all the way down to Leith, where Salvadoran artist José Campos, AKA Studio Lencashows fiery photographic self-portraits at Sierra Metro. With the simple purpose of a soccer ball, some lace or a tablecloth, he becomes a Latin American Madonna.

Up in the Bridges, that Talbot Rice Gallery has a show from London based Celine Condorelli, where art meets architectural history. A green indoor garden refers to Brazilian modernism, an installation of words and images reveals the untold story of potted plants in famous exhibitions (Rousseaus together with cheese plants, for example), another word and print relates to the labor history of the Pirelli tire factory in Turin.

The research (and the objects) feel too diverse and scattered. But a film about the creation of a children’s playground in South London turns theory into beautiful form. Past, present and future are superimposed in spectral recordings, and united in an unforgettable atmospheric poem about London written and voiced by Jay Bernard.

Daniel Silverlook at Fruit market, turns the viewer into the shown. A Greek chorus of clay busts stares back at you from the steel tribune as you enter: the audience observed. Each is not so much painted as seemingly made of paint. Thick layers of indigo, ocher and cobalt, mouths blood red or deep umber, with hints of all kinds of art from ancient shamans to Degas and Modigliani, these are a spectacular combination of image and sculpture.

The sense of touch, and why it means so much, continues in watercolor and Japanese ink drawings made while the London artist was in Death Valley, California. Enormous heads emerge from a kind of instinctive drawing that may be ancient or modern. A brilliant orange face oscillates between caricature, old master and cave painting. Silver’s art is exciting and deeply humane. Look at these heads looking at you, each with their own personality, and the urge is to go straight home and try to make one yourself.

Across the road, Edinburgh’s The city’s art centre traces the history of Scottish Modern Arts Association, founded in 1907 to develop the collection now housed in that building (and shockingly rejected by the Scottish National Gallery of Modern Art when it first opened, in Inverleith House, in 1960). The show has all the usual Glasgow Boys and Scottish colourists, but also many intensely original paintings of women – Joan Eardley, Anne Redpath – and a dazzling seascape by William McTaggart, each horizontal stroke sweeping across the canvas, a reminder of how brilliantly he could suggest it the cold, floating restlessness of the Scottish coast.

However, the origin of so much here is in the warmth of the Mediterranean south, specifically French modernism, this year’s theme The Scottish National Gallery blockbuster in the Royal Scottish Academy building. A taste for impressionism is magnificent, room after room of staggering masterpieces from the nation’s museums: Monet’s glittering poplar, Van Gogh’s orchard bursting into ultra-bright flowers, Gauguin’s heat-struck Martinique. Degas’ dancers are shown alongside silvery Corots and glittering Seurat gardens. An entire wall of Vuillard’s secretive Paris interiors is followed by the complete set of Matisse’s starbust jazz prints.

It’s an organizing narrative, entertaining and sensible, of how French art was bought up by Scottish railway engineers, Liberal MPs and marmalade magnates. This is told through the highly intelligent captions of the curator, Frances Fowle, which includes a couple of forgeries to reveal just how cunning these early 20th century collectors could be duped. A real Millet hangs next to what may well be a fake, but you have to use your own eyes.

Some of these paintings are world famous. Monet’s wonderful haystacks, mauve, mauve and umber, against the glittering snow-covered dusk, just before the light fades. How could he get the massive sight down in time, before nightfall? Or how could he remember it so perfectly afterwards? Gauguin’s Vision of the Sermon (Jacob Wrestling with the angel) are here, all the heads of the Breton women in their strange white bonnets framing the bizarre wrestling match, like a winged insect with four legs, against the throbbing crimson ground.

But there are many revelations culled from the back bedrooms of the museums, including the firing squad print by Manet, depicting street fighting during the Paris Commune in 1871. An X-ray of a previously unknown Van Gogh self-portrait painted on the back of Leader of a peasant woman appears in a light box along the front of the painting. (It’s unexpectedly conventional.) Most startling is Courbet’s terrifying dark wave, an ultramarine peak rising from white foam, straight out of a Japanese painting.

William Henry Playfair’s elegant galleries are painted in dazzling impressionist colors and the lighting is superb. I have never seen a show look better in the Royal Scottish Academy. Many visitors will have grown up with some of these paintings – Degas portraits, Blue Period Picassos – but this presentation gives them a respite they rarely have. No one needs to travel abroad to see so many French masterpieces. They are all here in one building in Edinburgh.