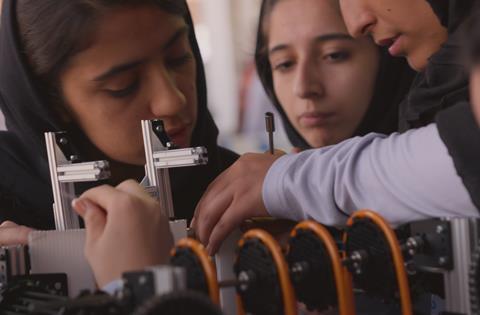 “I want to help people who use science and technology,” said Fatemah, captain of the Afghan Girls Robotics Team. “I want to go to Mars too.” It is this kind of boundless ambition that gave the team, which participated in competing robot events around the world, the nickname “Afghan Dreamers”. But even a dream of leaving the country seemed impossible at first, as this touching, albeit a little bit, documentary reveals. It took several attempts, and pressure from members of the US Congress, for the teens to get visas to travel to the United States for their first competition. Success and a certain degree of celebrity followed. But as power shifted in the homeland back to the Taliban’s religious totalitarianism, so did the public perception of Afghan dreamers.

A timely warning – a case study on how quickly the rights and opportunities of women can be curtailed, by order of the men in power.

This is the second feature film for director David Greenwald, after another film about technology and ambition: Sheet metal effects, about the troubled biotech founder David Blech. Previously, Greenwald was best known for his work as an editor, mainly of music documentaries and videos. This film, with its sympathetic cast of girl nerds and positive messages, should receive a warm reception in the festival circle, and will be of particular interest to events that want to showcase women’s stories from around the world. It also serves as a timely warning – a case study on how quickly the rights and opportunities of women can be curtailed, by order of the men in power.

Fatemah says she was inspired by watching the animated children’s film Robot at the age of six – something that would not have been available to her if she had grown up under Taliban rule. But when we first meet the girls (and one of their mothers), the gloomy days of the Taliban were still considered a dark chapter in Afghanistan’s past rather than a threat to its future.

The incredible journey of the Afghan dreamers, who explored the film through archive news footage and engaging talking head interviews, began in 2017, when 150 schoolgirls took part in a provincial-wide test in Herat, north-west of the country. This group was reduced to 20, and eventually to the group that was to make up the team – requirements for participation, Fatemah explains, including passports, good test results and parental permission. A natural gift for robot building was also a plus – Lida, who we first see beating her brothers in a shooting game, was a type of boy who spent the first years covered in oil and surrounded. in pieces of disassembled bicycles.

But parental support is key, in a culture where it is still considered decidedly strange and a little inappropriate to see a girl hold a wrench. Lida’s mother, a psychologist who was the first woman to learn to drive in her city, offers the girls a safe place to hang out and talk about the seismic changes in their lives. Following a series of successes at robotic events around the world, Dreamers’ public figures are becoming representatives of a brighter, more progressive future for their country. It is a cloak that they wear with grace and dignity. Unfortunately, this also makes them targets.

The rumble of unrest in Afghanistan is an eternal backdrop that suddenly becomes inevitable when Fatemah’s father, a staunch supporter of his daughter’s ambitions, is killed in a suicide attack on his mosque. It is suggested by some of their neighbors that Fatemah is somehow guilty. Then comes the Taliban’s sudden takeover, and with it a decree that the dreamers are infidels and should be put to death.

The robot team managed to escape from the country and now lives in unknown places. The dream continues for the girls, though perhaps not in the way they had envisioned and not in the country of birth. For the next generation of Afghan girls, however, the nightmare has started again.