Most basketball movies, from “He Got Game” to “Love and Basketball” to the recent “Hustle”, assume a lasting love for the sport more or less from the jump. Even the attention to the business side of the game tends to grow from a deeper, almost spiritual connection to the game’s rapid beauty. So it’s a remarkable change of pace that the new Disney + original film “Rise” takes a more methodical, sometimes practical approach to the story; within 30 minutes, the characters have barely played as much as a game pickup.

The opening part, which follows Charles Antetokounmpo (Dayo Okeniyi) and his wife Veronica (Yetide Badaki) on a strenuous and unsanctioned emigration from Nigeria to Greece, contains no hint that this film is actually about an NBA dynasty in progress. Charles and Veronica just want a better life for their family, and have already left the first son to others to keep him safe when they enter Europe, hoping to send for him soon. Instead, they get stuck in a painfully familiar loop: In order to get proper immigration papers, they must get legal employment that is on the books; to get a job they need proper papers. This is made even more challenging by an anti-immigrant sentiment that swept through Greece in the 2000s.

Meanwhile, their family is growing; the film takes up again with Charles and Veronica trying their best to support their four sons. The two eldest, Giannis (Uche Agada) and Thanasis (Ral Agada) like football, like their father, but when they stumble into a pick-up basketball game, they realize they have a natural talent – especially tall, graceful, strategically minded Giannis. The boys, who grew up with a spirit of teamwork within the family, realize that this can be an unexpected for the parents’ struggle. But the insane immigration loop of needing paperwork to achieve the status they largely want to solve the paper problem still persists. 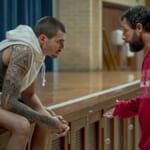 NBA fans will have a clue how this story ends; so, for that matter, students of the kind of feel-good sports movies Disney used to release in theaters when the Antetokounmpos siblings were young. The goal of “Rise” is not its unpredictability, but how well it can take the audience on the journey, even if they have a sense of how it can be.

Unfortunately, this particular inspirational sports saga often feels strangely flat, despite a pervasive sense of empathy. The characters (and the actors who play them) are never less than sympathetic, but their story feels superficial and businesslike – perhaps in part because it focuses so intensely on the struggles and strengths that everyone in the family shares, and robs them of individual qualities. When Giannis and Thanasis exchange a “Coming to America” ​​reference on their first trip to New York, it’s jarring, because they have not talked about anything but family or basketball for most of their playing time.

Director Akin Omotoso occasionally holds on to a beautiful image, such as the opening image of Charles and Veronica walking down a road in Greece, silhouetted by a giant, threatening sun, or a later overhead image of Giannis practicing that reduces the path to a geometric feeling of calm. These blooms make it all the more frustrating that so many other scenes feel together, rather than composed. (Random example: a moment where Charles gives his information to a potential employer is shot from three or four vantage points – not for nervous flash, but just to cut around for no apparent reason.) Appropriate for neither-here-nor-there quality of so many streaming movies, “Rise” is sometimes reminiscent of a theater movie and an imperceptible TV movie, joined together – but in the end, the TV movie dominates.

To be clear, there is nothing wrong with a less demanding sports history, suitable for family audiences. Young children who live and breathe basketball will probably like this one. But in “Rise”, as with many basketball movies (including “Hustle”), the excitement is derived from triplets behind the scenes and conditions more than gameplay. For this to work, there must be a great sense of detail or urgency; Omotoso and screenwriter Arash Amel barrel into a bunch of NBA drafts of meet-and-greetings that are more packages of information than real, fully developed scenes. The film’s points about immigration come early; much of the rest is that good things eventually happen to talented and hardworking people.

See also  Why is Marvel doing better than Star Wars on Disney+?

It may be a story, but it’s not much drama. As is often the case, the end-point follow-up about the real people has more genuine feelings than the film it writes after.

“Rise” is now being streamed on Disney +