Sports anime has become one of the most talked about genres. From hits like Haikyuu!! to Kuroko no Basket, various series have drawn many viewers. One of the most beloved aspects of sports anime is the commitment and teamwork that is constant throughout the stories. These stories are so touching that even the least athletic of anime fans can fall in love with them.

However, not every second of sports anime is about unity and mutual support. Sometimes characters have to struggle to realize their love for the game and the importance of teammates. These disagreements are more than simple misunderstandings; they end up leaving characters distraught and questioning their abilities in the game. There’s a reason this is such a common theme in sports anime.

Hinata and Kageyama need some work in Haikyuu!! 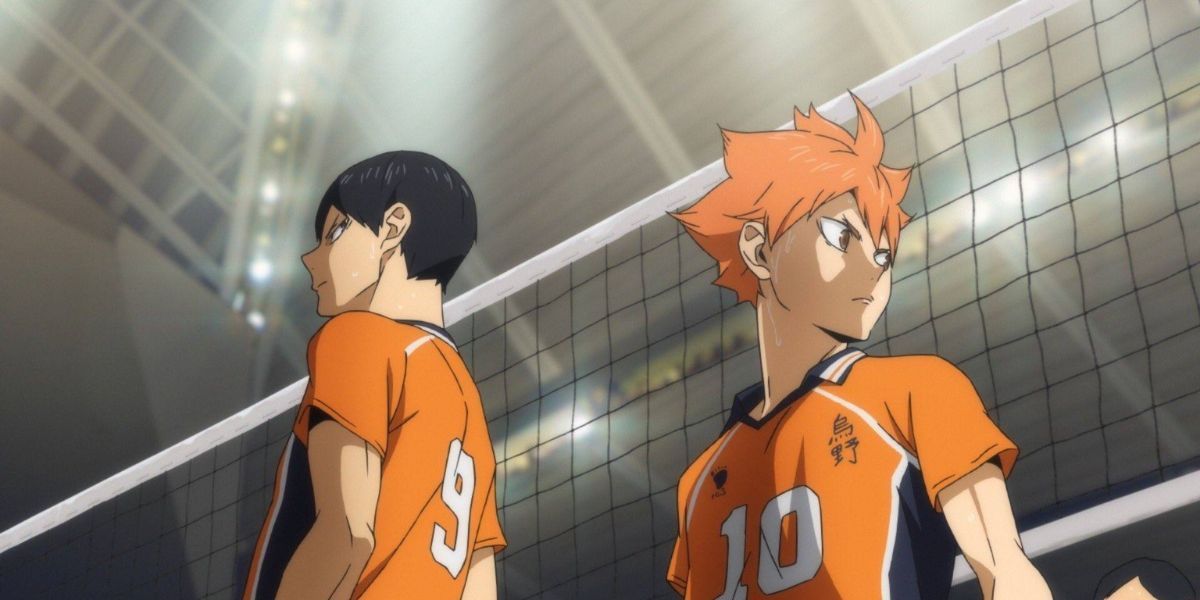 Haikyuu!! follows protagonist Shoyo Hinata on his journey to become a professional volleyball player. The majority of the series focuses on his time as a freshman at Karasuno High School, where he serves as a middle blocker for the volleyball club. On his first day, he meets Tobio Kageyama, a rival player from middle school. Kageyama is the starter for the Karasuno volleyball club, but has had some problems with his teammates in the past. He was considered the “King of the Court” due to his desire to dictate to his teammates. As he begins to work with Hinata, he learns to trust his new teammates and their individual playing abilities. While most of Kageyama and Hinata’s interactions end in petty arguments, their biggest disagreement affects the entire team, as Hinata and Kageyama’s strength as a duo earns them many points during matches.

Hinata expresses to Kageyama that he wants to grow as a player by changing things. Kageyama disagrees because he thinks his sets are perfect and Hinata shouldn’t have a problem with them. Earlier, Hinata ate with her eyes closed, relying on Kageyama’s expert aim to put the ball directly where Hinata’s arm swung. However, Hinata realizes that he won’t always have Kageyama as the setter, which inspires him to try spiking with his eyes open. It’s not surprising to see how badly the two fail when Hinata makes this decision. Hinata’s choice causes a major rift between the pair, and they are advised to train separately by their trainer, Keishin Ukai. During their time apart, the boys identify that they must grow individually and adapt to each other equally in order to work as teammates. By working alone, the two can return as better players, both individually and as a pair.

Reki and Langa find their passion in SK8 the Infinity 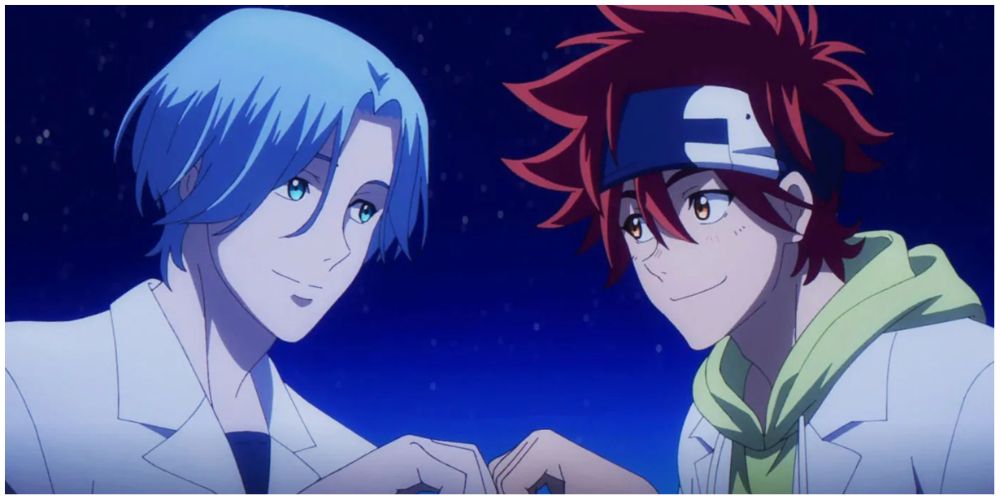 SK8 the Infinity delves into the terrifying world of underground skateboarding competitions known as S. High school student Reki Kyan introduces Langa Hasegawa, a transfer student from Canada, to his passion for skateboarding. It doesn’t take long to start skating like a pro, thanks to his previous snowboarding experience. The duo fall in love skating together and attending S with other skateboarders. It is not until Reki finds himself in a terrifying race against the sadistic founder of S, Adam, who is not afraid to play hard and hurt his competition, that things change. Adam challenges Langa to a race after Adam falls in love with Langa’s skating style. Reki asks Langa not to rage against Adam, but Langa goes against Reki’s wishes. This decision causes the relationship between the two teenagers to become rocky.

The two end up arguing about the importance of the race. Reki does not want Langa to compete because he is afraid that Langa will be hurt by Adam. Langa insists on racing against Adam because he has never raced against an opponent like him before. It is not until Reki is not with Langa at S that Langa realizes what he really loves about skateboarding. Although the excitement and competition is fun, he only enjoys this because he can skate with Reki. Their argument is a turning point in realizing the love that originally formed Langa’s passion for skateboarding. 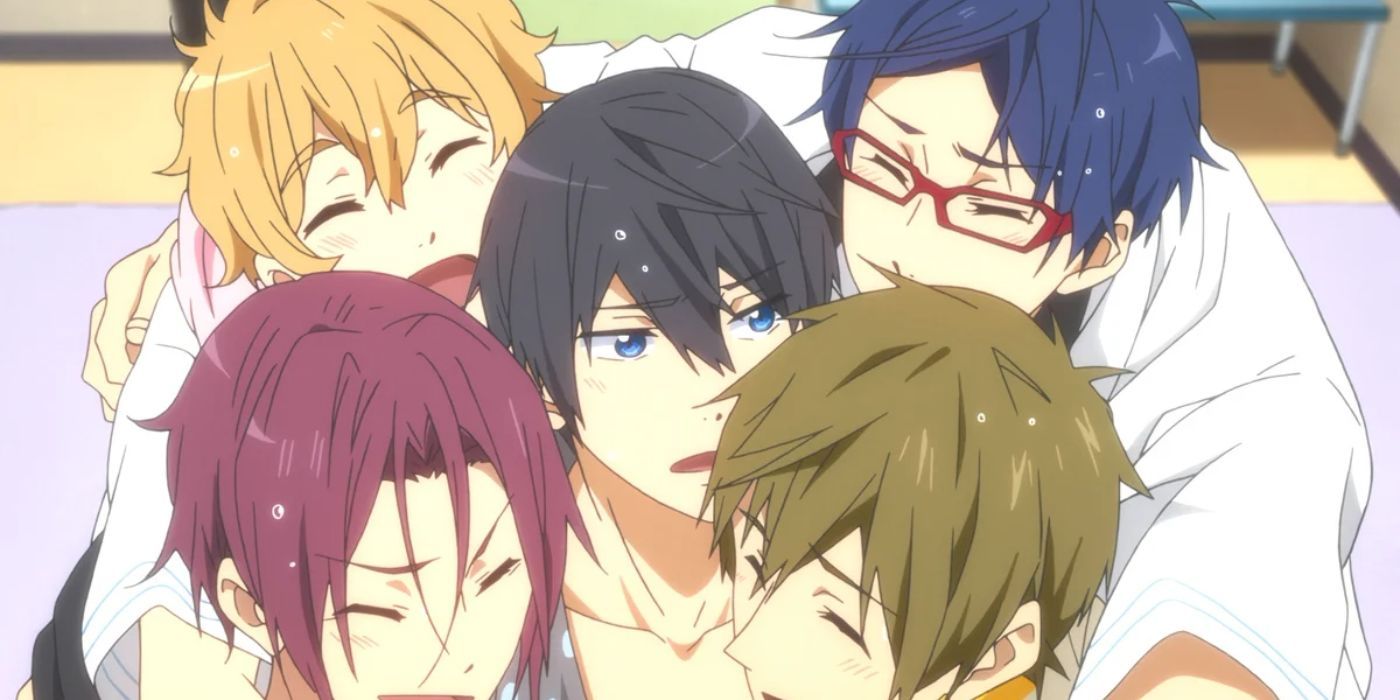 One of the biggest breaks in sports anime history is i Free!. The story follows four boys who restart the swimming team of Iwatobi High School after it had disbanded due to a lack of members in previous years. Three of the boys – Haruka Nanase, Makoto Tachibana and Nagisa Hazuki – grew up swimming together, while the other, Rei Ryugazaki, was recruited by them. Earlier, Haruka, Makoto, and Nagisa swam relay races with Rin Matsuoka, who left to train in Australia. As high school students, the three friends discover that Rin has returned and joined the Samezuka Academy swimming club. While friends in the past, Rin now sees the three as her bitter competition.

The interaction between the two schools is filled with tension as the unresolved issues between Rin and his old friends get in the way. Even worse for the Iwatobi boys is the fact that they don’t understand Rin’s hostility towards them. Rin’s desire to improve and beat Iwatobi ends up affecting him negatively and he loses his spot on the Samezuka relay team. However, he still gets the chance to compete. The Iwatobi boys make the decision to let Rin join their relay team—a decision that changes Rin’s view of swimming by discovering what is truly important to him. Although he loves the competitive aspect, the most important thing for him is swimming with friends.

Teamwork is extremely important in sports anime, which is why so many viewers tune in to begin with. But in order for each character to grow, they must face hardships, thus realizing where their weaknesses are and how they can become stronger. The “breakup” between two or more characters allows them to reflect on their relationships with other players while identifying where they need to improve. Without these disputes, characters would not be able to recognize the importance of friendship and why they are so passionate about their sport.