Lucifer and the Biscuit Hammer – Preview Guide for Summer 2022 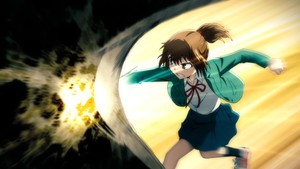 The War of the Rings has begun, and it’s up to the Princess and Beast Knights to stop Animus the Mage from destroying the world with its ultimate weapon: The Biscuit Hammer, a giant club floating in space. Yuuhi Amamiya, Lizard Knight and Samidare Asahina, Princess Anima, fight against his stomach and golems to save the world – but only so that they can destroy it themselves.

Lucifer and the biscuit hammer is based on Satoshi Mizukamiits manga and flows on Crunchyroll on Fridays.

How was the first episode? 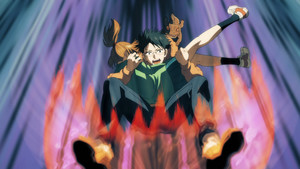 
For an episode that begins with a guy waking up to find a talking lizard in his room and soon discovers that he must use his newfound magical powers to save the world from a giant hammer floating up in space, the premiere of Lucifer and the biscuit hammer was certainly boring. I get it back when the manga premiered almost twenty years ago, that the level of “OMG SO RANDOM” humor may have done the job of arousing readers’ interest, but we live in a time of Chainsaw and Dandadan, now. You can not just throw away the whole half of an episode on a talking lizard shouting at a lazy guy to save the world anymore

Especially not when the production values ​​you work with are so bad. While the aesthetic of
Lucifer and the biscuit hammer is not exactly “horrible”, in itself, almost everything about how it has been directed and animated is wrong on a basic level. Character movements are stiff and unnatural; there are a handful of too many photos between each cut; pictures are framed in a completely junk and disorienting way. I would bet that at least half of this episode consists of close-up close-ups of character faces and endless shot-reverse-shot cuts, which does not provide interesting storytelling at all. If you took a shot every time the camera unnecessarily panned up to reveal a totally subversive object, you would be blackout full before the credits rolled. At one point, the episode uses what I can only describe as a Jello crossover for no apparent reason. All of which gives you the impression that this show was produced by a bunch of completely overwhelmed interns who were tricked into putting together an entire anime while the paid employees took vacations.

Admittedly, the episode picks up a bit when Samidare comes into the picture and they start fighting against that fish monster. Yuuhi does not seem at all able to carry the show on his own, and there is only so much that the script can come out of the screaming lizard, so giving our hero literally anyone to interact with is a gift from the gods. I’m admittedly interested in how and why Samidare’s plan to save the world from destruction so that she herself can have the chance to destroy it, but the little curiosity is not enough to get me excited to see more of this anime. I hear it told Lucifer and the biscuit hammer is a fan-favorite series, and the manga may well be excellent, but I think no one is going to walk away from this anime adaptation with anything other than strongly tempered expectations. 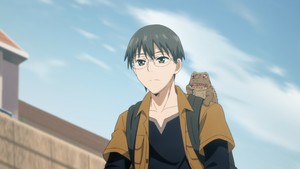 
I remember liking the first omnibus edition of the manga this series is based on. So why did the anime version leave me so cold? I’m forced to assume that the tempo has been turned off, or that the story has been dulled down in some way I do not quite remember, or perhaps simply that the addition of colors in a layout I can only think of as “baby- poop “” and Hisame’s voice may be to blame, possibly all in varying amounts. But for whatever reason, this first episode of Lucifer and the biscuit hammer felt it was as deliberately weird as possible, while not giving us any grades to mess with. In a show where the nominal goal for most of the episode is to save the world, it feels like a problem.

It certainly does not help that Yuuhi, our presumptive protagonist, gives in to his first impulse when he finds a talking lizard in his room and throws it from the balcony. I can understand being surprised and scared, but is there any reason to kill a talking animal, even if it has scary human hands? Fortunately, Sir Crescent does not die, but it is hardly an introduction to Yuuhi who is loving, and his sarcasm is very quickly spoiled on top of the attempted murder. But do not worry, he is significantly less annoying than his professor, Hisame, who starts relatively well (although why would you tell someone that a patch on their face makes them look more masculine is over me) but towards the end of the episode is a screaming harpy hitting him with his scooter because he’s near her younger sister. She, quite impressively, becomes more and more annoying as the episode continues, which may not bode well for her as a recurring character.

But really the crux of the matter is that it’s hard to drum up any interest in seeing two (possibly three) rumors decide to destroy the world instead of saving it. There may be something about watching dust that is forced to save the world, and I do not ignore the possibility that this is actually what the story will turn out to be, but this is so generally unappealing that it is difficult to wish the. give it another episode. It’s not offensive, but it’s not something I’m interested in pursuing either – although I can go back and read that volume of manga again to see why this did not work for me when it did. 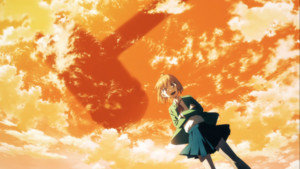 All right, let’s get the big, ugly, poorly animated elephant in the room out of the way. This show looks like piss. I do not know what forces have conspired that take a long-awaited adaptation of a classic cult manga and hit it with the ugly stick, but by god, they threw that stick out of titanium and hit this IP until it was pulled into the dirt . The show barely moves, and half the time when it does, there’s an obvious digital effect meant to mask how they actually did not have time to draw anything. There are Newgrounds projects from 2008 with more basic solid animation than this production. The meager attempts at motivated storyboarding or interesting direction that exist are weighed down by a foundation made of tissue paper taped over the bottomless pit that is the modern anime production bubble. Any personality or humor derived from the images is a result of not messing with the original art and posing from the manga, and even that is not always well recreated. It sucks. It’s not going to get any better. No project deserves this, but especially not one as beloved as this.

With all that said, if you can get over the ugly concrete wall that is the animation, there is a lot to like Biscuit hammer who still manages to fight to the surface. Even as someone who feels that the opening chapters in the series are the weakest part of Satoshi Mizukami‘s oeuvre I have read, there are many small seeds in this first episode that promise interesting fruit. Yuuhi is a misanthropic jerk, but instead of being portrayed as a genius in his exhausted attitude, it is made clear that his worldview is the result of something much darker in his past that has taught him that it is safer to reject the world than to make oneself vulnerable. He is in many ways different, on purpose, and although it may gnaw at the viewers, it is clear that he is a more rounded person than he wants people to believe.

And it’s really funny to see how hard he rejects the typical shonen hero’s call to action – made all the more charming by Mizukami’s penchant for weird iterations on classic tropics. The celebrity who was sent to recruit Yuuhi is neither a divine being nor a cute mascot, but an ordinary old lizard who just does not want to get out of his house. The doomsday machine that threatens the world is a giant cartoon hammer floating in the sky, just waiting for a Galactus-sized Bugs Bunny to pick it up and crack the planet like an egg. Samidare, the supposed princess Yuuhi is destined to fight for, is not a fair girl who needs to be guarded, but an enterprising daredevil who gets her loyalty by promising that it will be her fist, not the biscuit hammer, that will destroy the world he sees out to loathe to protect. These subversions certainly do not look as fresh as they did 15 years earlier, but they still offer a lot of flavor and personality to a story that would feel much more messy without it.

Like Mizukami later The planet with, it draws a delicate line between well-known genre troupes in a mix that raises many exciting questions about where the story will go from here. What does Samidare really mean when she says she wants to destroy the world, and why is that what convinces Yuuhi to join her? What is the real story behind these magic rings, knights and golems? I’m genuinely curious to find out, to learn more about who these characters are, and I really wish I could give the series a full neck recommendation. Or that I could at least recommend the manga – but it has been sold out for many years and unaffordable animals on the secondary market. So for now, I have to give a half-hearted thumbs up to a decidedly suboptimal way of experiencing this story.