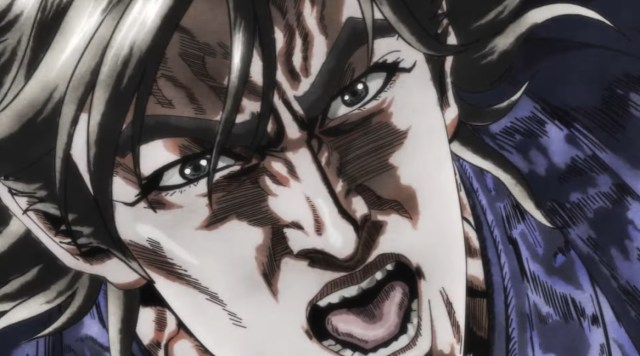 “Enjoy being an adult!”

Manga art doesn’t get much more macho than the works of Tetsuo Hara. Best known as the artist for Fist of the North Star, Hara doesn’t draw fresh high school students working towards confessing their love for their crush or trying to recruit members to save a quirky club from being shut down. He draws grown-up heroes awash in the ideals of full-grown old-fashioned masculinity, thick at heart and rippling musculature.

As such, Hara’s characters are often seen wandering through post-apocalyptic wastelands or kingdoms at war. However, Hara’s newest character is found in a McDonald’s commercial.

Opening with a close-up of a falcon soaring through the sky, the perspective of the video (which boasts animation direction and character design by Hara) flips around to show our protagonist, a samurai clinging to the side of a sheer cliff. “To the Adults of Japan,” the on-screen text greeting plays, and as the samurai continues to climb, we hear his thoughts. “The challenges an adult faces are difficult. In work, family and dealing with people your own age, the walls in front of you are high.”

The samurai comes to a gap between himself and his next handle, and after a brief pause to steel his resolve, roars “But we will!” and jumps fearlessly over the abyss.

“Today we create the future!” he continues, his fingers gripping the stone like the talons of a passing falcon. With one last effort, he drags himself to the top of the mountain. “Keep moving forward, even if it’s just one step at a time. Never give up and one day, when you reach your destination, you will see the ultimate view,” the samurai tells us, admiring the view of Mount Fuji and the Tokyo skyline, before giving us one last command:

Then the guy takes a giant bite of a burger.

It is unclear if he had the hamburger in the folds of his kimono the entire time while climbing the mountain, or if it was waiting at the top of the mountain as a video game power-up. What we can say for sure is that it is one of McDonald’s Japan’s new Samurai Mac burgers. The intermittently available line uses traditional Japanese spices to create bold burger flavors, and the one featured in the video is Wafu Grill Tamago Nikuatsu steak, or the Japanese-style Barbecue Egg Thick Beef cheeseburger, whose key ingredient is hatcho miso, a dark-colored premium miso paste produced in Aichi Prefecture. The new thing is also coming to the Samurai Mac section of the McDonald’s menu Ninniku Zakugiri Potato Nikuatsu beef cheeseburger, which boasts smoked bacon, a potato bun that accompanies the steak, and soy and spicy garlic chili/pepper sauces.

Both sandwiches are priced at 500 yen (US$3.80). They go on sale on January 4th, usually the first day people in Japan go back to work after the New Year holidays, but hey, as the samurai said, it’s not easy being an adult, but at least you can occasionally reward yourself with a tasty burger.